Sweden and China Post issue a set of stamps on pheasants on 9th May 1997. Among the pheasants featured on stamps are Phasianus colchicus and Chrysolophus amherstiae.

Hong Kong Post issues a stamp sheetlet on Mainland Scenery on 3rd May 2007 to introduce the natural wonders and monuments in China. This stone forest is formed after weathering and erosion over a period of 270 million years.
Posted by Helix Philately at 11:48 No comments: 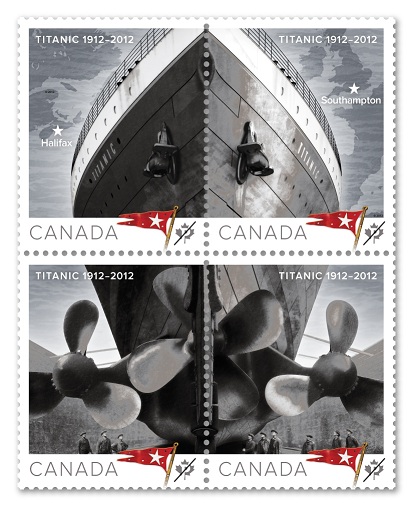 Ottawa (ON) – Canada Post unveiled today the images of the five stamps that will be issued on April 5 to mark the centennial of the sinking of RMS Titanic. The collection, created by Haligonian design team of Dennis Page and Oliver Hill, showcases the best-known ship in the world with depth and realism and adds some poignant Canadian attributes.
Canadians, and the citizens of Halifax, Nova Scotia, in particular, played a central role in the Titanic event through recovery efforts. “To this day, Canada, and especially Halifax, has an enduring and remarkably human connection to the Titanic story,” says the Honourable Peter MacKay, Minister of National Defence and Regional Minister for Nova Scotia. “The Canadian legacy of the Titanic still resonates strongly with everyone.”
Creating a detailed image of a ship that has been under water for a century presented a wonderful challenge for Halifax-based designer Dennis Page. “This was the biggest man-made moving object on earth that after setting off on her maiden voyage hit an iceberg and ended in disaster. That really stuck with me and how I was going to show that feeling.” Page basically put himself in the moment. “I imagined myself standing below her bow looking up which really gives that vantage point and perspective at how vast something like this could be.”
Through this stamp collection Canada Post takes pride in respectfully marking an event in which so many lost their lives, and honouring the countless Canadians who helped in the recovery mission. “This is really our way of paying tribute to the Canadians involved,” says Mary Traversy, Canada Post’s Senior Vice-President of Mail. “With these stamps, we hope to preserve the legacy of the Canadians whose lives were deeply touched when Titanic sank off our coast.”
The collection will be available on April 5 in all Canada Post outlets, online and via mail order. Pre-orders are also possible on canadapost.ca/shop.
The Titanic stamp collection
The Titanic stamp collection is composed of five stamps, a stamp pane, a souvenir sheet, an uncut press sheet, prepaid postcards, framed prints, a collectible album and a stamp and coin collector envelope.
The four PERMANENT™ domestic-rate stamps come as two pairs of se-tenant stamps. Two show the Titanic’s impressive bow and the other two feature the stern. The stern stamps are available only on the pane of 16 stamps, which includes eight stern stamps and eight bow stamps. The bow stamps are also available in a booklet of 10 and on the pane of 16 stamps. The international rate stamp shows a full-colour side illustration of the Titanic, sailing on a calm ocean with a layered map showing relevant locations. It is available in a booklet of six stamps, a souvenir sheet and a limited edition uncut press sheet. There will be two Official First Day Covers. The first will feature a photo from Father Brown’s collection of the captain of the Titanic walking on the deck with the bow and the stern stamps. The second cover makes use of the international denomination stamp and features a photo of a paper boy in New York City announcing the disaster.
Additional information about Canadian stamps can be found in the news section of Canada Post’s website, and photos of these new stamps are also available. Stamps and other products will be available at participating post offices, or can be ordered online by following the links at canadapost.ca/collecting, or by mail order from the National Philatelic Centre. From Canada and the USA, call toll-free 1-800-565-4362, and from other countries, call 902 863-6550.
-30-
For more information about the Titanic collection:
Media Relations, Canada Post
613 734-8888
medias@canadapost.ca
For interviews or requests for Minister MacKay:
Joshua Zanin, Press Secretary
Office of the Minister of National Defence
613 996-3100
Posted by Kah-Wai Lin at 11:13 No comments:

If you wish to add this badge to your website or blog, see the instruction here: http://helixphilately.blogspot.com/p/blog-list.html

Promote Your Page Too